One of the new exciting initiatives happening in Rwanda is Minister Mondays.  A few times a month, the Minister of Health, Dr Agnes Binagwaho goes on Twitter and answers questions from the general public.  She answers questions from a wide range of topics, this week's focusing on nutrition.  That kind of access to leadership and transparency is to be applauded and is something pretty unique, not just in Rwanda but in the world.

But one thing we thought could be better was that the primary form of interaction was via Twitter.  Though it is a great platform for reaching a digital audience, it does leave out quite a few participants in a country where the penetration of PCs (and Twitter) is still low.

As we specialize in building SMS services, we decided to volunteer a bit of time to see if we could bridge that divide.  Last week we met with the Minister and discussed what could be done.  Happily we found that the Minister had the same goals as we did, trying to reach a wider audience, with a focus on transparency, on putting those questions and answers on the public record. 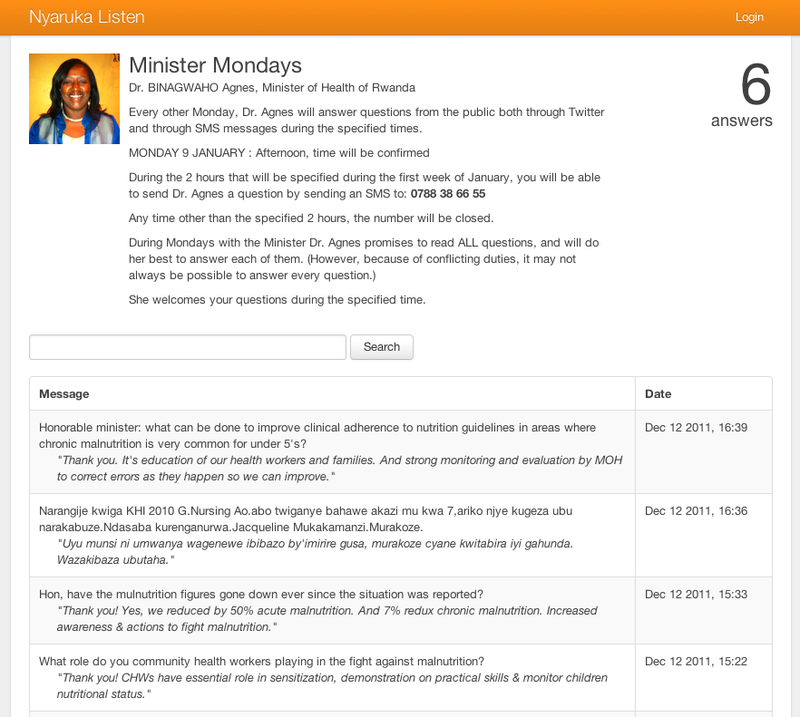 A few days later and we had put together Nyaruka Listen, a platform to make that kind of interaction as easy as possible.  Since we were on a tight schedule and wanted to make the service available across carriers, we decided to leverage our Android relayer to deliver messages to our service.  That let us quickly use a regular SIM card to relay messages from the MTN network and back.

The final service is simple.  Incoming messages to the Minister Monday phone number are ingested by Listen, the sender receiving an SMS confirming that it was well received.  Meanwhile, the Minister can see all incoming messages on a web dashboard and can instantly reply using a simple interface.  That reply is sent back to the original sender's phone and made public for the world to see. 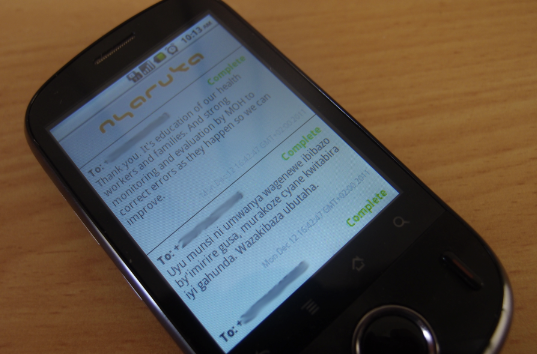 It is a simple product, but one we think could have real potential for other organizations.  The penetration of mobile phones in Rwanda and other East African countries is high and only getting higher and SMS is a cheap and reliable technology that people use on a daily basis.

Using Listen, an organization can set up a hotline where their customers or beneficiaries can send in comments and concerns via SMS.  Each message is viewable by everyone in the organization and can be dealt with appropriately.  Forward looking organizations can even follow Dr Agnes's model and be transparent, publishing the responses for the public to see.

Of course this kind of system might seem like it would be expensive but it not need be.  We believe so strongly that this would be beneficial to other organizations that we're willing to provide Listen to any organization for a really compelling price.  You too could give your community a voice and the power of easily interacting with your organization via SMS.

If you are interested in exploring that further make sure to contact us to find out more.  But either way, we hope to see you interacting with the Minister during the next Minister Monday session in early January.